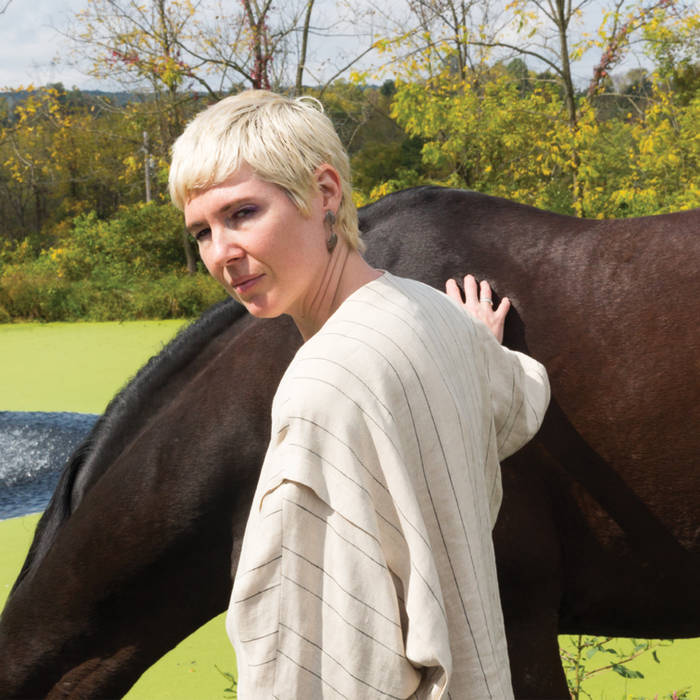 While the collection of songs on Philadelphia/Michigan musician Rosali’s electrifying third LP, No Medium, explores the often dark territory of loss, death, sexuality, self-sabotage, and addiction, there is a surprising lightness to its sonic being. Backed by members of the David Nance Group, Rosali (Long Hots, Wandering Shade, Monocot) wades through the emotional mire with infectious, earworm melodies led by her luminous voice. With their rich, raw instrumentation, these rock ballads sound like the resilience discovered in facing one’s darkest moments, the assurance of the calm and clarity that comes after the storm. As she sings on the second track, “Bones,” “Through the darkness of the field / I walk through without yielding / To the rest of the feelings / I’m carrying.” With her confident song craft, Rosali illustrates the ability to push through, moving toward something greater without being destroyed by the weight of trauma.

Rosali wrote the bulk of these songs in January of 2019 while on a self-imposed two week residency in the hills of South Carolina. Alone in an old farmhouse, she experienced supernatural events and faced her own demons in the deepest darkness. Perhaps as a result, there is a boldness that permeates the album, a daring vulnerability in both the lyrical themes and their musical accompaniment. Rosali says, “I approach guitar playing the same intuitive way I sing, which is profoundly spiritual for me. Where words fail, the guitar becomes the conduit for raw feelings, providing a direct connection to them. I’m constantly working on being fearless in my work, which means showing the rough side, the mistakes along with the triumphs.”

While writing No Medium, Rosali was inspired by harmonographs—swinging pendulums that create beautiful illustrations of the mathematics of music—considering how the mind, too, creates images through song. She imagined herself as the swinging pendulum—“a body suspended from a fixed point” (Encyclopedia Britannica), governed by the forces surrounding her. She thought about the pendulum’s relationship to time, movement, and even its use in divination practices. The album’s title, lifted from Charlotte Brontë’s, Jane Eyre, resonated with this vision: “I know no medium: I never in my life have known any medium in my dealings with positive, hard characters, antagonistic to my own, between absolute submission and determined revolt. I have always faithfully observed the one, up to the very moment of bursting, sometimes with volcanic vehemence, into the other.” With the multiple meanings of “medium”—as middle ground, a term for psychics, and as the material of artistic expression—No Medium felt like the appropriate name, describing how the self is shaped by the patterns of life .

The influences for the sound of No Medium reflect this pairing of assured vulnerability, in the stylistic coherence of Bob Dylan’s Desire, the tender delivery in Iain Matthews’ Journey From Gospel Oak, the strut and swagger of Bowie’s Hunky Dory, the ambition and beauty of Gene Clark’s No Other, and the playful catharsis of Harry Nilsson’s Nilsson Schmilsson. The Richard and Linda Thompson-esque album opener “Mouth,” places Rosali within both a physical and emotional space. “East of the river I was travelling on / watch me lie, undone / rest me in a forest, overgrown / until I am free of all that I’ve known,” she sings. There is movement, both within a cityscape, and in her outlook on love. Speaking of her thought process when writing the song, she says, “I imagine confidently walking away from the past, toward a new approach to love and intimacy to achieve a closer relationship with myself.”

In “Pour Over Ice,” Rosali explores her relationship with alcohol and her former reliance upon it as a social lubricant to quell her social anxiety, an energizer to keep moving, a means to cope and self-medicate, and most addictively, to lure out her wild side as a free flowing, good time girl. While drinking helped her through some shitty times, it eventually got the upper hand and became an insatiable hole within. She says, “The ‘you’ in the song is really me, talking to that component of myself struggling with drinking and self-sabotage, caught up in the cycle, and all the bad choices I made.” She sings, “Maybe I didn’t care enough / or can’t remember / chasing small pleasures / making fire from embers.” Rosali wanted her lead guitar on this track to simultaneously sound like a slow motion car crash propelling her through the day, and the sound of a gnawing hunger for something more.

Engineered by James Schroeder and featuring Schroeder (Simon Joyner, DNG, Connor Oberst), Kevin Donahue (Simon Joyner), David Nance, Noah Sterba, Colin Duckworth, and Daniel Knapp, the album was recorded in 10 days and the raw immediacy of the music is palpable across these 10 tracks.

Added adornment was contributed by Philadelphia's Robbie Bennett (War on Drugs) on organ and keys, and Matt Barrick (The Walkmen, Jonathan Fire Eater, Muzz) makes a percussion cameo on “Whisper,” which was tracked at Philly’s Silent Partner Studio, where No Medium was mixed by Quentin Stoltzfus (Mazarin, Light Heat). The open creative collaboration elevated the songs, resulting in the exciting, vibrant sound of the album.

Rosali is the solo incarnation of Philadelphia-based musician, Rosali Middleman. Through songwriting and performances, Rosali shares resonant emotions and the authenticity of being, unveiling herself to connect with broad audiences. Rosali’s songwriting realizes life as rich and alluring melodies within the framework of traditional popular songwriting. Catch Rosali as the guitarist for Long Hots. ... more

Bandcamp Daily  your guide to the world of Bandcamp